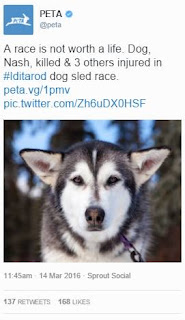 PETA does not believe in keeping pets. Pets of any kind. Animals are free and pets are slaves. Essentially they want to eliminate all forms of dogs and cats that cannot live on their own in the wild, as well as get rid of all farm animals and force us all to be vegans. I have no more use for PETA than I have for any other ideologue who wants to make me do things the way they think it should be done.

The dogs in question are not slaves, and they for goddamned sure weren’t harmed by their owners or the race itself. They were attacked by a drunk. Dogs are a musher’s entire life. I KNOW these people, Aliy Zirkle is a friend of mine and you only have to watch the interviews with her and a tearful Jeff King to see how devastated they are by the threat to their dogs.

This article on The Atlantic entitled PETA’s Terrible, Horrible, No Good, Very Bad History of Killing Animals digs deep into PETA’s deplorable track record when it comes to living up to their own ideals, the ideals that the crucify every other pet-owning person on the face of the planet,

In 2011, People for the Ethical Treatment of Animals (PETA) behaved in a regrettably consistent manner: it euthanized the overwhelming majority of dogs and cats that it accepted into its shelters. Out of 760 dogs impounded, they killed 713, arranged for 19 to be adopted, and farmed out 36 to other shelters (not necessarily “no kill” ones). As for cats, they impounded 1,211, euthanized 1,198, transferred eight, and found homes for a grand total of five. PETA also took in 58 other companion animals — including rabbits. It killed 54 of them.

These figures don’t reflect well on an organization dedicated to the cause of animal rights. Even acknowledging that PETA sterilized over 10,500 dogs and cats and returned them to their owners, it doesn’t change the fact that its adoption rate in 2011 was 2.5 percent for dogs and 0.4 for cats. Even acknowleding that PETA never turns an animal away — “the sick, the scarred and broken, the elderly, the aggressive and unsocialized…” — doesn’t change the fact that Virginia animal shelters as a whole had a much lower kill rate of 44 percent. And even acknowledging that PETA is often the first to rescue pets when heat waves and hurricanes hit, that doesn’t change the fact that, at one of its shelters, it kills 84 percent of supposedly “unadoptable” animals within 24 hours of their arrival.

My answer to PETA is NO. Forever and always NO. Now get out of my face PETA scum. I have actual important work to get done.