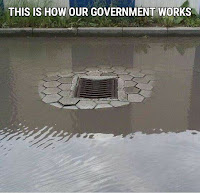 Please direct your attention to the image at right, one of those ever present internet memes that purport to offer valuable insight to the problems we face in modern day society. The problem is, they aren’t. The aren’t memes for one, and they aren’t usually clever insights for another.

Let me explain this image for the layman, for those not studied in the subjects of design or engineering.

The solution to this problem is to understand the physical forces at play here, to make sure that the people who build roads and drainage systems understand how to avoid failings like this by instruction and certification and to make sure actual installations don’t fail in this fashion through inspection or hold the creators responsible through litigation.

It is also a good idea to have systems in place to make sure that all these things occur at the time and place they are needed, rather than decades later when the random passersby happens to snap a picture that they think proves some bigger point about systems and efficiency.