This could amount to sacrilege. They are updating the special effects for all 79 of the Classic Star Trek episodes, giving them all new computer generated effects shots.

I’m withholding judgment on this until I see the finished product. But I’m not holding my breath, either. The primitive effects are just fine with me. I don’t need my classic Enterprise to have ‘go fast’ stripes.

I’ve never seen the revised versions of the first two seasons of Red Dwarf. They went through a similar process of updating. Like Doctor Who and its ships on strings, there is something appropriate about old campy SciFi having visibly dated special effects, especially if there is an air of humor to the program.

On the other hand, I liked the revised versions of Star Wars, with the exception of the Whussification of Han Solo. So updated effects might be OK with me…

…and then there is the urge to tinker with the show. The episode “The Enterprise Incident” for example. Here’s a chance to finally put the Romulans in Romulan ships instead of the Klingon ships that were originally used. After all, why not? The Klingon Bird of Prey that is used for most of the movies and all of Next Gen owes it’s existence to the mythology that was built up around that one little slip up in Classic Trek. If the updates fix that problem, then why…?

Like I said, I’ll wait for the premiere. I’m just not holding my breath. 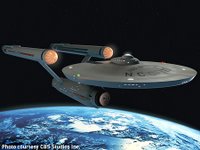 Read the interview over at Aint It Cool News with Mike Okuda and the rest of the crew that worked on the makeover. There’s also a Q&A over at Startrek.com and the original announcement from Paramount as well as images of the CGI models they will be using. I have to say, the ship does look gorgeous. But then, she always did.

The most noticeable change will be redoing many of the special effects, created with 1960s technology, with 21st century computer-generated imagery (CGI). Upgrades include:

The refurbished episodes also feature higher quality sound for the famous opening theme. The original score by Emmy Award-winning composer Alexander Courage, has been re-recorded in state-of-the-art digital stereo audio with an orchestra and a female singer belting out the famous vocals. A digitally remastered version of William Shatner’s classic original recording of the 38-word “Space, the final frontier…” monologue continues to open each episode.

However, when you read between the lines, there is some admission on the part of those involved in the process that there are some digital ‘fixes’ going into the regular scenes, not just the inserted FX scenes and bridge viewscreen images. Text ‘fixed’ on library screens, some of the aliens will be given ‘sparkle’…

…I’m still withholding judgement until I see it. Broadcast information can be found here. For Austin it will air on KNVA at 4:00 pm, Saturday, September 16th.